Pop singer and former pupil Grace Carter returned to Blatch last week to give a talk to pupils.

Grace, who studied with us for five years from 2008 to 2013, spoke to pupils from Years 7, 8 and 10 about her blossoming music career and about how to deal with emotional trauma. Grace has spoken before about having anger issues as a child, and her songs have reflected on a range of emotions.

Our students were captivated as Grace spoke openly about her past experiences and how making music helped give her creativity an outlet.

After a breakthrough year in 2018, which included positive reception for her single Why Her Not Me? Grace finished third in BBC Music’s Sound of 2019 list. Featuring among other up and coming talents from the UK, Grace has been tipped as one to watch this year. She said: “There’s so much talent in Brighton and I’m so blessed to have been among so many amazing people.”

Blatch was delighted that Grace accepted the invitation to return; music teacher Mr Walmsley said: “I heard Grace’s song on the radio and realised she was a former pupil. Not only that, but the content of her song seemed like it would be relevant to our pupils as it is about personal difficulties that she herself experienced during her time with us.”

Mr Harrold added: “We are always delighted to welcome former pupils back to Blatchington Mill School and Grace is an excellent example of how hard work and determination can lead to success. We are extremely grateful to her for discussing both the high and the low points of her life with our students who I know were really inspired and motivated by her visit.” 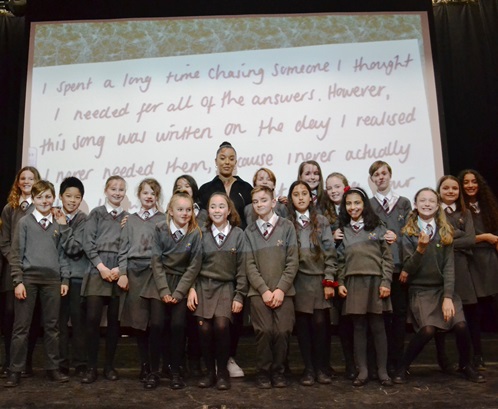