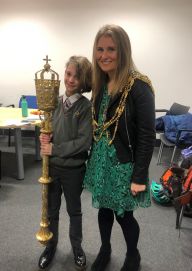 Year 11 students Ryley and Amel presented a film that had been created to showcase the ‘Bike It Wild’ camp that they attended along with five other Blatch students last summer. The camp was a celebration of all the hard work the students had put in at Blatch’s first girls bike club, run in connection with Sustrans. The club taught the girls how to ride bikes safely, navigate roads and also how to repair and look after their bikes. It is hoped that the film created during the girls’ time at the Bike It Wild camp will encourage other schools and students to get involved in this type of project.

Following Ryley and Amel’s presentation, year 7 student Iris read out a poem she had written about our home city. The poem was incredibly well received by the councillors, with Councillor Chris Henry saying: ‘Well done to Iris, a Year 7 student at Blatchington Mill who read her poem, Starling, to councillors today. It was a clever, emotional & evocative poem which I loved.’ 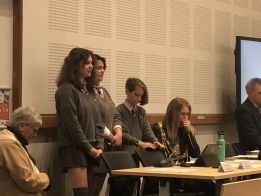 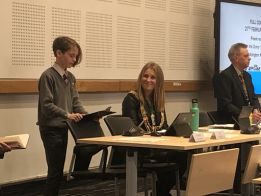 Streaking through gold-tinted skies
Sun setting on the horizon
And in the glassy black eyes
Of the starling that flies
Over a city of pride.

There it is! The sea!
Ribboned in pink, orange and peach
Gentle waves crashing to the beach
Smooth pebbles that shine with the sea
This is where the show will be
Where summers are spent and minds are free.

Slipping into the murmuration
The twisting, turning, swooping formation
Thinking as one in the breathtaking flow
Dancing in the hearts of the people below.

Nestling under the weight of the pier
Of generations of bright lights
Fleeting adrenaline from wild rides
Money poured into the pride of winning
Young and old
Laughing, grinning.

No need to rush anymore-
As our dance fades away,
Dancefloors light up
And we drift down…
and dream of Brighton days.