Blatchington Mill was recently extremely proud to send two of our students to represent our school at the opening of a full council meeting at Hove Town Hall. The students, Freddie and Samala, read a poem written by Freddie at the request of Mayor of Brighton & Hove, Alex Phillips. The poem was well received by councillors and the Mayor, who has invited Freddie and Samala to her Civic Christmas Reception. 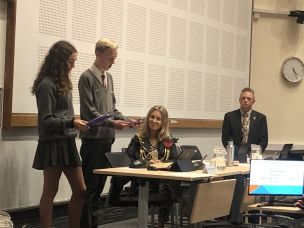 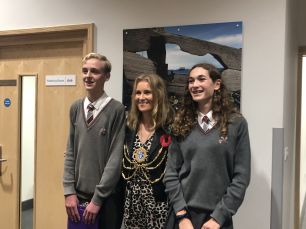 You can read the poem, written by Freddie (assisted by Samala), below.

As the moon ascends to her place in the sky she
gazes down upon Brighton. A rich jewel in the
earth’s crust radiating the splendour of its
enduring light towards the heavens.

A nocturnal cat prowls the streets, where the
gleam of a shop window catches her coat, and
from black, she’s suddenly: onyx, vermillion,
maroon, mahogany, ebony. The shades of
exposed flint glinting on the shore.

A young woman strolls along the promenade, too
restless to sleep. Her face is on one side
ensnared by the harsh orange glare of the
streetlight, the other caressed by the blue glow
of the pale moon.

Beneath her feet waves, once a cool teal now
blackened by the cover of night, uncoil from the
vast breadth of the ocean. Like ribbons woven
with filaments of moonlight; like couriers with a
spectral cargo. They crest at the struts of the
palace pier which, above, is caught in a state of
perpetual excitement. Enveloped in a bubble of
constant pandemonium.

As the first light of day pierces through the canvas of night, bathing the tumbling verdant downs in a yellow brilliance, the sights and sounds of the night remain, yet now invigorated with a colourful vibrancy found only in Brighton.